Berbils is an episode from the original series of ThunderCats. Written by Leonard Starr, it originally aired on September 11, 1985.

The ThunderCats meet the Berbils, a group of robot teddy bear-like creatures from the planet Ro-Bear. Their leader, Ro-Bear Bill captures Lion-O and Snarf but the ThunderCats soon learn that the Berbils are "good guys" and they help them defeat their natural enemies, the Giantors and the Trollogs. Making matters worse, Mumm-Ra transforms himself into a swarm of locusts and he descends upon the Berbils' crops. Lion-O and the mighty sword defeat him. In triumph, the Berbils agree to help the ThunderCats build the Cats' Lair.

Lion-O learns the value of friendship and the importance of cooperation. When groups have interests in common, joining together and sharing their talents and resources can best serve their welfare.

Positive peer group relations are important for children. They provide an opportunity to interact socially, express emotions, develop a self-image, and solve interpersonal problems. Friendship expectations differ in children according to age. Younger children choose friends on the basis of common activities and propinquity. Older children choose them more on the basis of central personality characteristics and include elements of self-disclosure, empathy, and understanding in their choices. In general, friendships based on stable mutual interests are the most intimate and enduring.

Panthro succeeds in constructing a brand new ThunderTank by utilizing only equipment that he salvaged from the wreck of their crashed Flagship. As he is proudly showing it off to the other ThunderCats, a sudden unexpected hail storm breaks out, raining stones and boulders on them. While the ThunderCats seek shelter inside the Flagship, Panthro chooses to remain with his "baby", the ThunderTank. The hail covers the entire Flagship with stones, but using the ThunderTank, Panthro is able to dig out the ship.

In the mean time, Lion-O and Snarf who are scouting the nearby forest, encounter a Rhino Creature who turns out to be rather harmless. As they continue to travel deeper into the forest, Lion-O falls into a giant hole in the ground. Snarf tries desperately to pull him out but before he can succeed, he and Lion-O are both captured by what appear to be robotic bears. The bears then lead the two captives to their village where they are introduced to their leader known as Ro-Bear Bill. He turns out to be a very friendly being and after untying Lion-O and Snarf, tells them all about his race. He tells them that he and his fellow bears are known as Berbils and they came to Third Earth from their planet Ro-Bear.

While Ro-Bear Bill is showing Lion-O and Snarf around his village, an alarm is sounded which startles everybody. Ro-Bear Bill explains that the alarm signifies that the Trollogs are about to attack the village. He goes on to explain that these bulldog-like creatures regularly plunder their village for their Berbil Fruits. They then hand their loot to the Giantors, massive humanoid creatures who occupy the region where the Trollberry Bushes grow. Since the Trollogs cannot eat anything but the leaves of these bushes, they have no choice but to do the Giantors bidding, which includes stealing Berbil Fruit for them.

The Berbils sympathize with the Trollogs predicament, which is why they use only crude darts to keep the marauders at bay, though without much success. Seeing the Berbils being overrun by the Trollogs, Lion-O jumps in and sends the Trollogs fleeing after displaying the awesome power of the Sword of Omens. When the Trollogs return empty handed, the Giantors are greatly angered and decide to attack the Berbil Village themselves. Realizing that the Giantors would be too much for him to handle alone, Lion-O summons the other ThunderCats who arrive in the ThunderTank and help him to defeat the mighty marauders.

Now good friends, the ThunderCats and the Berbils are unaware that Mumm-Ra has been quietly observing all the preceedings from his Black Pyramid. Furious that the ThunderCats have befriended the Berbils who would now provide them with an endless supply of food, Mumm-Ra transforms into a swarm of locusts and attacks the Berbil Village. The individual locusts in the swarm then morph into one massive locust. Lion-O leaps onto the giant insects back and forces it to fly away from the village, thereby saving the Berbils. The giant locust then changes back into a swarm right above a volcano, causing Lion-O to fall into its crater. As he is dropping to a certain death, Jaga's spirit materializes and advises him to call the Sword of Omens. He complies and the sword flies Lion-O out of the volcano.

That evening, the Berbils organize a huge feats for their newest friends, the ThunderCats. Ro-Bear Bill then notices Tygra's blueprints for the Cats Lair and he and the other Berbils offer to help them construct it. The ThunderCats accept the Berbils' kind offer with gratitude. 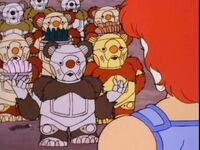 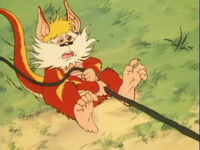 Mumm-Ra: The Eye of Thundera, finally within my reach. But the ThunderCats are resourceful, they could be bothersome.

Lion-O: You dare to make fun of me, the Lord of the ThunderCats!