Exodus is the pilot episode from the original series of ThunderCats. Written by Leonard Starr, it originally aired on January 23, 1985.

From beyond any known galaxy, bringing with them the laws and ideals of their doomed planet, Thundera, come the ThunderCats. Jaga, the wise...Tygra, the invisible ... Cheetara, the quick ... WilyKat & WilyKit, the junior cunning duo ... Panthro, the deadly ... and Snarf. The ThunderCats - all sworn to serve their young Lord, Lion-O, and to instruct him in the secrets of the "Eye of Thundera," the "eye" embedded in the hilt of the Sword of Omens, is the source of the TunderCats' power. Pursuing the ThunderCats to Third Earth and determined to possess the "Eye" for their own evil purposes are the hideous Mutants from the planet Plun-Darr, led by the reptilian S-S-Slithe. They form an unholy alliance with the ageless devil-priest Mumm-Ra.

Social order is maintained by a respect for the laws and ideals of one's community. The duty of Lion-O and the ThunderCats, as laid out by Jaga, is to carry the Code of Thundera: to live a life based on truth, justice, honor, and loyalty. Truth is being consistent with fact and reality. Justice is the quality of being fair. Honor is integrity and having a sense of ethical conduct. And Loyalty is being faithful to one's ideals and peers. In addition, being responsible to the Code means to combat evil in whatever form it appears.

The development of moral standards and a mature conscience occurs progressively from childhood to adolescence and adulthood. The progression is through three levels. In the first level, one is responsive to labels of right and wrong but in terms of reward and punishments as consequences of action or in terms of the physical power of authority figures.

In the second level, the expectancies of others in the community are considered valuable and actions relate to their expectations in terms of conforming to and maintaining the social order. Finally, moral values are defined autonomously as valid apart from the authority of groups or a person's identification with groups (Kohlberg, 1970).

Inside the Thunderian Flagship, the ThunderCats watch their beloved home planet Thundera on the brink of destruction. At Jaga's behest, Cheetara brings the young Lion-O to the control room where they all witness the horrific scene of Thundera exploding before their very eyes. Lion-O is greatly saddened by this event but Jaga consoles him that even though Thundera is gone, the Code of Thundera will continue to live on in him as the Lord of the ThunderCats.

At that moment the ThunderCats convoy comes under the attack of the Mutants who succeed in destroying all of the escort ships leaving only the Flagship unharmed. The Mutants then board the Flagship and a battle ensues between the Mutants and the ThunderCats. Slithe and Jackalman manage to locate the sword chamber where they find Lion-O and Snarf protecting it. While initially amused at the sight of the young ThunderCat struggling to lift the sword, Slithe and Jackalman are shocked when Lion-O musters up all his strength to raise the sword and make it roar. The Mutants flee back to their Mothership and blast off into space.

Panthro reveals that due to the damage that the Flagship has taken from the Mutant attack, they will not be able to reach the galaxy that they were initially aiming for. Instead he calculates that their best option is to set the course for Third Earth due its breathable atmosphere. Despite its close proximity, Third Earth is still light years away and so Jaga instructs the ThunderCats to enter the Suspension Capsules while he pilots the ship. Despite the ThunderCats insistence, Jaga refuses to enter the capsule due to the fact that it would be risky to let the Flagship run on autopilot in its damaged condition. He also explains that even thought the capsules drastically slow down the aging process, some aging does take place and as he is the oldest, he would not survive the trip even in the capsule.

The ThunderCats tearfully bid Jaga farewell and enter the Suspension Capsules. Jaga continues to pilot the ship for a number of years until he feels that he can no longer continue. The elder ThunderCat then sets the ship on autopilot and breathes his last, his body disappearing into thin air. The Flagship crashes onto Third Earth and Lion-O and Snarf's Suspension Capsules are thrown out of the ship along with the Sword of Omens. Snarf wakes up first and awakens Lion-O who is now a grown man.

At that moment, the Mutant Mothership lands near the Flagship's crash site and start attacking the Suspension Capsules with the ThunderCats still sleeping inside them. Seeing this, Lion-O jumps into action and fights the Mutants. Snarf then throws the Sword of Omens towards Lion-O who uses it to summon the sleeping ThunderCats. Upon hearing Lion-O's summon, the ThunderCats spring into action and force the Mutants to teleport themselves back to their ship and fly off in retreat.

Snarf: Snarf didn't do anything of course. Just found the sword, that's all.

Panthro: The Mutants will never rest until the Eye of Thundera is in their clutches.
Lion-O: That will never happen. I'll see to it.


(After Lion-O awakens the ThunderCats with the Sword of Omens)
Monkian: The... the ThunderCats! They're... they're loose!
Panthro: We're gonna loosen your bones for you, too!

Jaga: You did it with the sword?
Lion-O: Well... the sword kind of did it for me.

Panthro: If you guys were as mean as you are ugly, then maybe you'd be trouble!

Jaga: Yes, Lion-O, Thundera is gone. But the Code of Thundera will live as long as you, as Lord of the ThunderCats, carry it in your heart. It will be your sacred duty to rule according to that Code in our new home, wherever that will be. Justice, truth, honor, loyalty.

This episode was released on the following home media: 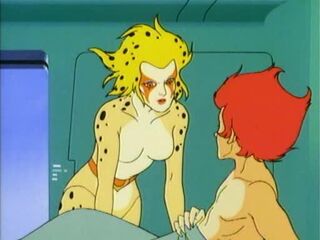 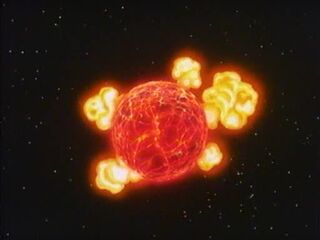 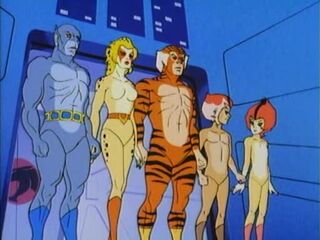 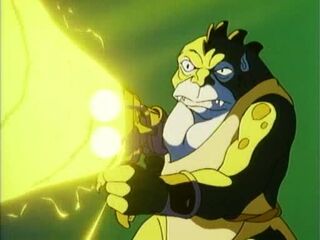 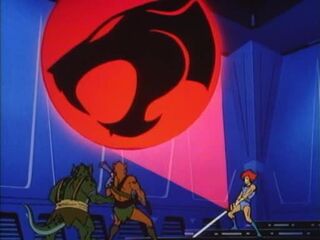 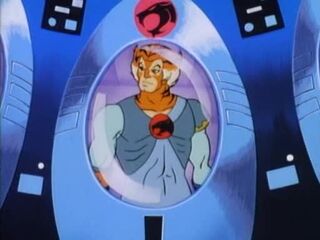 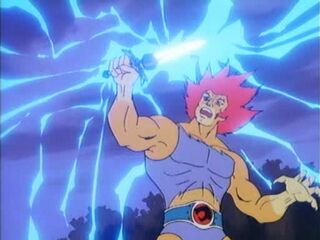 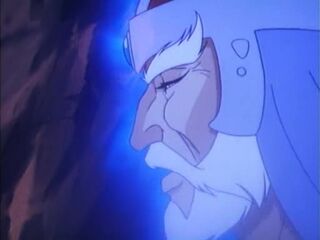 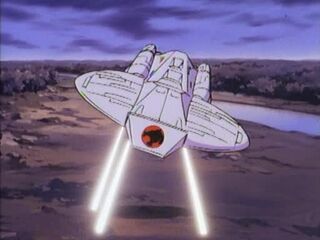 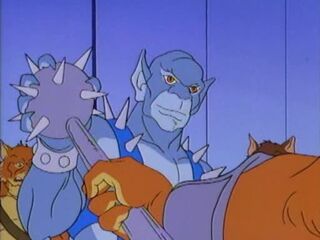 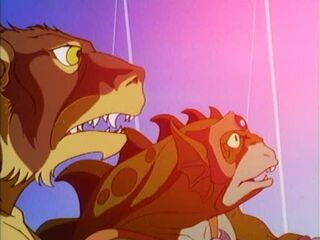 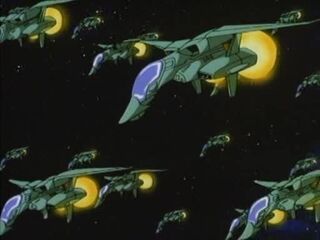 Retrieved from "https://thundercats-ho.fandom.com/wiki/Exodus?oldid=32729"
Community content is available under CC-BY-SA unless otherwise noted.