Feliner - Part II is an episode from the original series of ThunderCats. Written by Stephen Perry, it originally aired on November 1, 1985.

The ThunderCats have virtually completed their spacecraft, the Feliner, but cannot make it fly because they lack a Megacondensor. Desperate to return Snarfer to his home, Snarf suggests that the ThunderCats might find a condenser in the wreck of the RatStar. The episode follows the ThunderCats' efforts to retrieve this vital component, opposed by Ratar-O, the Mutants, and Mumm-Ra. Eventually, they succeed and blast-off for the Planet of Snarfs with Snarfer. Right up until the last moment, it seems that Snarf will want to return with Snarfer and will leave the ThunderCats. At the last moment, however, he decides to stay with Lion-O.

Inspired by Snarf's idea, the ThunderCats pursue the hyperspace megacondenser, which they need to repair the Feliner and take Snarfer home to the planet of Snarfs. Because the part is so valued by them, it becomes the object of pursuit also for both Mumm-Ra and Ratar-0. As a result, the ThunderCats are called upon to use extra effort to obtain it. Once the Feliner is repaired, Snarf must make a critical decision of choosing to return to the planet with Snarfer or to remain with the ThunderCats. Although his kinship bonds and his curiosity draw him, he finally decides it is his present life with the ThunderCats that he values most.
It is a mark of perception to be able to appreciate and value what is good in our present lives, for example, our parents, friends, and the realities of our living situation. Sometimes we are inclined to feel that something different would be better. So we idealize the past or fantasize about the future. In doing so, we lose an appreciation of the present and our perspective on what is good about our present reality. Then, unlike the ThunderCats, we do not make the effort to carry out our daily responsibilities and maintain that which is of value to us. It is important to keep in mind those things we value about our lives, whether our relatives, friends, or groups of which we are a part. And in doing this, it is important also not to take them for granted, but to make the effort to sustain our involvement with them and show our appreciation.

As the Mutants crawl out of the crashed spaceship RatStar, Slithe is quick to criticize Ratar-O, holding him solely responsible for the defeat that they suffered at the hands of the ThunderCats. This does not sit well with Ratar-O and a display of his Rat's Eyes daggers' power is sufficient to change Slithe's mind. Following Ratar-O's orders, the Mutants quickly piece together a Mutank and with it haul the RatStar's wreck all the way to Castle Plun-Darr.

As the ThunderCats drive out to retrieve the Hyper-Space Mega-Condenser from the RatStar, Snarf confides in Snarfer that he is thinking about joining Snarfer when he leaves for the Planet of Snarfs. What the Mutants and the ThunderCats don't know is that Mumm-Ra is quietly keeping abreast of all the proceedings from within his pyramid and plans to use the Mega Condenser as a bait for the Cats.

When the ThunderCats arrive at the Mutant's fortress they immediately come under attack from the Mutants driving the Mutank. While the ThunderTank and the Mutank lock their metallic horns, Lion-O sneaks into the RatStar's wreck but is shocked to see Mumm-Ra with the Mega Condenser. After a brief scuffle, Lion-O manages to get Mumm-Ra to drop the piece of equipment and flee. Ratar-O then steps in but he too is defeated by Lion-O. The victorious ThunderCats return to Cats Lair with their hard earned prize, the Mega Condenser.

As Panthro, Cheetara, WilyKit and WilyKat prepare to return Snarfer to the Planet of the Snarfs, Snarf reveals that he too will join Snarfer, shocking all those who are present. However, Snarf changes his mind as soon as the Feliner lifts off and decides to stay on Third Earth after all. 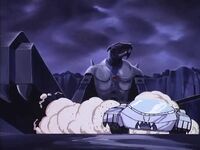 Ratar-O: Don't bother me scavenger! I must concentrate.

Snarf: There must be something you can do to get this thing going, Panthro.
Panthro: I'm working on it, Osbert.


Panthro: Snarf. You may turn out to be a genius!
(picks him up and spins him around, laughing)
Snarf: Hey, Panthro! Put me down.

Lion-O: Give me that condenser, Mumm-Ra! It's no use to you.

Retrieved from "https://thundercats-ho.fandom.com/wiki/Feliner_-_Part_II?oldid=27871"
Community content is available under CC-BY-SA unless otherwise noted.