Mandora - The Evil Chaser is an episode from the original series of ThunderCats. Written by William Overgard, it originally aired on September 20, 1985.

Mandora of the interplanetary Control Force, enlists Lion-O and Snarf to pursue three criminals they unwittingly released from her cell sled. Rocketing through the sky on her Electro-Charger space bike, they find Plutar in alliance with the Living Ooze. Mandora zaps the prisoner and the Ooze with her enzyme gun. Mandora's Boomslang device catches the machine/man Burnout. The Mudhogs imprison our group when they catch up with the last pickpocket Quickpic. Lion-O regains the Eye of Thundera in time to summon the cavern in the ThunderTank and scare off the Mudhogs with blinding rays of light.

Preservation of the world's natural environment is a challenge to present and future generations. The prudent and judicious care taking of the earth's resources against depletion by waste and mismanagement is a task in which we all share. In this allegorical episode, characters like the escaped criminals Plutar, Burnout, and Quickpic, and the ignorant Mudhogs symbolize the dangers of pollution, non-conservation of energy, and a mindless plundering and misuse of the earth's resources. Such lack of concern for the environment has the potential to lead to an imbalance between mankind and the earth, which serves as our sustaining force. Respect for the environment is an essential concept to be conveyed to children in their socialization process.

One day while taking a stroll, Lion-O and Snarf stumble upon a huge metal cell-like box. When he hears noises coming from within the box, Lion-O quickly opens it, not paying heed to Snarf's protests or the word "DANGER" clearly printed on the container. Two of the cell's occupants burst through and disappear among the long grass. The third occupant, Quick-Pick, a gangly, green insect like robot, helps to pick up Lion-O and Snarf before he too leaves. Suddenly Lion-O and Snarf realize that they have both been robbed. The robot stole both the Sword of Omens and Snarf's Secret Coin Purse. The two scour the grass for the perpetrator but fail to locate him.

Suddenly Mandora, officer first-class of the Interplanetary Control Force, zooms in on her Electro-Charger. Furious upon seeing the empty cell, she informs Lion-O that the three prisoners that he released are the galaxy's most wanted criminals, and it was she who had temporarily placed them in that cell until they could be taken to the Gray Penal Planet. The three then climb on the Electro-Charger and head off to capture the three escapees.

One of the criminals, Plutar, an alien with a toxic touch, comes across the Living Ooze. The two agree to join forces in order to be able to defeat the evil chaser. When Mandora, Lion-O and Snarf reach the Living Ooze, the living slime grabs all three of them as well as their bike, trapping them in itself. Plutar reveals himself as well but before he can do any damage, Mandora grabs the Enzyme Catalyzer from her bike and fires it at the ooze, disintegrating it. Her second salvo targets Plutar and he is disabled as well.

As Lion-O and Snarf are waiting for Mandora who has taken Plutar back to the cell, they spot the second criminal, a massive tank-like robot known as Burnout. Lion-O stops Burnout from running over an innocent deer. He then takes on the mechanical monstrosity and while the two battle it out, Mandora arrives. Using her Boomerang and a little help from Lion-O, Burnout is defeated. This time, Manodra entrusts Lion-O to transport Burnout to the cell while she tries to locate Quick-Pick using a tracker.

As she nears Quick-Pick's location, Mandora is grabbed by hands emerging from holes in the ground. The captors turn out to be Mudhogs who have also nabbed Quick-Pick. When Lion-O and Snarf return from returning Burnout to his cell, they are seized by the Mudhogs as well. After a little urging from Mandora and Lion-O, Quick-Pick steals the Sword of Omens from the Mudhog King who had taken it from him when he was captured. As soon as he grabs the sword, the Mudhogs realize their captor's plan and lunge onto him. He tosses it to Lion-O who uses his trusty blade to call the other ThunderCats. The familiar roar of the ThunderTank's engine is heard soon enough as it crashed into the Mudhogs underground lair. Then, instead of firing the Cat Blasters on them, Panthro opts to use the tank's powerful headlights to temporarily blind the Mudhogs, sending them fleeing.

Back at Cats Lair, the ThunderCats are discussing the day's events while Snarf is still lamenting about his Secret Coin Purse which he never got back. At that moment, Panthro steps in with the purse and hands it over to Snarf, telling him that Mandora left it for him. 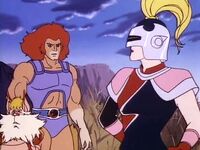 Snarf: That low-life beanpole picked my pocket! Crook!
Lion-O: Come on, Snarf; you can't accuse someone without proof!
Snarf: You need proof? Then where's your Sword?
Lion-O: It's--it's gone! The Eye of Thundera is gone! But how?
Snarf: He's a sneaking good pickpocket, that's how.

The Living Ooze: Who dares to pollute my streams and kill my trees? That's MY job!

Lion-O: (to the Mudhogs who have surrounded them) Stay back! I don't want to destroy you.
Snarf: Who's going to destroy whom?


Quick-Pick: For once I'm glad to see you, Mandora. Anything you have in store for me would be an improvement over this.

Mandora: Before it's too late, Lion-O, I have to say you'd make a great evil-chaser.
Lion-O: Thanks, Mandora. Coming from you that says a lot.