Mandora and the Pirates

Mandora and the Pirates is an episode from the original series of ThunderCats. Written by William Overgard, it originally aired on November 4, 1985.

Officer Mandora arrests the renegade robot Cracker and takes his Space Freighter to the Grey Prison Planet. Cracker traps her and releases all the prisoners. Mandora sends her bike Electra Charger to bring Lion-O to her aid. The "reformed" pickpocket, Quick-Pic, helps Lion-O rescue Mandora by pushing the Orbit Brake and bringing the planet to a halt. Lion-O is kidnapped by the Captain and when the freighter is in deep space again, he is made to walk the plank. Mandora and Quick-Pic retrieve the lost Sword of Omens and pursue the freighter. They arrive just in time to catch Lion-O as he falls through infinity. Lion-O signals the ThunderCats with the Sword's Eye to warn them of Cracker 's arrival on Third Earth. The ThunderCats trap Cracker and his robot crew in a steel net. Mandora and Quick-Pic set off to return them to the Prison Planet.

Lion-O does not hesitate to go to the aid of his friend Mandora. And Mandora, in turn, rescues Lion-O when he is in trouble. Both Lion-O and Mandora stand-up for Quick-Pic in seeking a pardon for him. He has earned their support by his reform and the good deeds he performed in assisting them in combat against Cracker and the prisoners.
Friends are worthy of support and assistance, and when we interact with them, we feel a camaraderie and closeness. Sometimes, however like Quick-Pic, when we do something wrong that we are ashamed of we are isolated from friends. We must never feel that we cannot change or make amends or that we must always be an outsider. When we do something with good intentions to make-up with our friends for what we've done wrong, we will be accepted back into their friendship.

As she is patrolling the area around the Gray Penal Planet, Mandora notices a massive beat-up spaceship that appears to be in multiple violations of space travel laws. After flagging it down, she boards the freighter and orders its captain, who claims to be the only person on board, to take the ship to the Gray Penal Planet for more investigation.

Monitoring Mandora's activities from the control room inside Cats Lair, Lion-O and Snarf immediately recognize the ship as the pirate ship Jolly Rogers, owned by the nefarious Captain Cracker. When they alert Mandora about this, Cracker, along with his robotic crew imprison Mandora inside their ship's control chamber. They then proceed to release all of the Gray Prison Planet's inmates.

Mandora manages to use her remote control to program her bike, the Electro-Charger, to fly to Lion-O on Third Earth so that he can come to her aid. A belligerent Rhinosauran is the first prisoner that Lion-O encounters when he reaches the Gray Prison Planet. Fortunately, Quick-Pick arrives on the scene out of nowhere and assists Lion-O to lock up the Rhinosauran before the two head to locate Mandora.

In another section of the space prison, Cracker has bound Mandora and left her dangling over a massive cauldron of boiling oil. Just before she can be lowered into the pot, Lion-O and Quick-Pick burst onto the scene and rescue her. Cracker and his crew manage to nab Lion-O and make him walk the plank into outer space blindfolded. Luckily he is rescued by Mandora and Quick-Pick before he can fall to his doom.

As Captain Cracker is sailing the Jolly Rogers to Third Earth, Lion-O succeeds in warning the other ThunderCats about the evil pirate who easily ensnare Cracker and his crew in a massive net. Mandora then transports them all to the Gray Prison Planet. 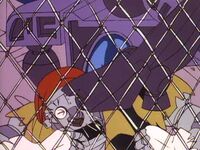