Mongor is an episode from the original series of ThunderCats. Written by Peter Lawrence, it originally aired on October 3, 1985.

WilyKat and WilyKit explore the Ruined Temple. They move a hexagonal rock and unwittingly free Mongor, the external image of Fear. They are scolded for releasing the monster and leave the Lair. The other ThunderCats set out individually to find them. Mongor grows in power and size as he ravages the countryside. He encounters Tygra and wraps him in his own Bolo Whip. He captures Cheetara in a force field net, and anchors Panthro's shoulder spikes into the ground. WilyKat and WilyKit return to the Ruined Temple and study the hieroglyphics on the rock. They learn that Mongor needs fear to maintain his power and can be defeated if you do not look him in the eye. They tell this to Lion-O. He destroys Mongor's power by reflecting his force fields. Cheetara, Tygra and Panthro are freed from their constraints. Lion-O no longer fears Mongor and orders him back to his prison, which is sealed forever.

In this episode, Mongor appears as a creature who represents fear and the destructive negative elements of this emotion. Lion-O, on advice from WilyKat and WilyKit who have discovered this ancient wisdom, learns not to let fear feed on itself and become more dangerous and invincible. Using their advice, he is able to deflect Mongor's energy and conquer the emotion. No longer fearful, Lion-O becomes invulnerable to Mongor and is able to face him and defeat him. WilyKat and WilyKit encounter fear of a different kind, a positive respect for the anger of the adult ThunderCats. Even though Snarf has to chide the ThunderCats from scolding too harshly, WilyKat and WilyKit recognize their elders' anger is justified because of their own misdirected adventure. In the end, recognition of culpability and credit by both the younger and older ThunderCats bring about a reconciliation and expression of relief over the defeat of Mongor.

An important capacity for children to attain is the ability to differentiate types of positive and negative feelings, such as the two kinds of fear displayed in this episode. The ability to be attuned realistically to one's internal feelings is an important element of interpersonal sensitivity. Recognizing when an emotion is appropriate and realistic and when it is unjustified and out of proportion to reality helps children take feelings into account in their actions and behavior rather than avoiding them or being overwhelmed by them.

Deep in the heart of the creepy Black Pyramid, Mumm-Ra is keenly watching the magical waters of his cauldron. The waters reveal a scary image of Mongor, the fiery goat-like demon who feeds on fear and spreads terror wherever he goes. Mumm-Ra knows that Mongor would prove to be a formidable opponent for the ThunderCats and could very well defeat all of them. However, the demon remains imprisoned in a tomb, the location of which is uknown even to Mumm-Ra himself.

Back at Cats Lair, Tygra and Cheetara struggle to analyze the cause of a number of unexpected tremors that have suddenly begun plaguing Third Earth. Accompanying the tremors is a mysterious force field which obstruct the lair's various scanners and equipment, rendering them useless. Panthro, Lion-O, and Snarf who are driving in the ThunderTank are equally perplexed by the tremors as well as the electrical interference. By the time the tank and its passengers arrive at the lair, the tremors have ceased. Even though Panthro's inspection of the systems reveal that everything has returned to normal, Tygra draws their attention to the fact that the disturbances are growing stronger with each occurence.

Then WilyKit and WilyKat confess that they are responsible for all odd happenings. At first, the adults laugh at the idea, but soon their smiles are replaced by a serious expression as they listen to the ThunderKittens' story. The twins reveal that while out exploring earlier that day, they had stumbled upon a Ruined Temple. Inside the temple they came across a large six-sided block of stone with runic symbols. Out of curiosity, they moved the stone slab and ended up freeing a frightening goat-like being who was trapped in the tomb beneath the slab.

Furious at the reckless and irresponsible behavior exhibited by WilyKit and WilyKat, the other ThunderCats give them a piece of their mind. Snarf steps in and stops the ruckus. He tells the adults that scolding the youngsters isn't the right thing to do. It could frighten them so much that they might not even approach the adults for help in the future. The adult ThunderCats realize their mistake but before they can make amends with the ThunderKittens, the notice that the two have sneaked out while they were arguing. Worried about the safety of the twins with Mongor on the loose, the ThunderCats head out in search for them, each taking a different route.

Tygra is the first one to come face to face with Mongor. Despite Tygra's best efforts, Mongor proves to be a much stronger opponent and succeeds in binding Tygra with his own Bolo Whip. Cheetara is the second one to fall prey to Mongor when he traps her in a net. Panthro is the next to get caught when Mongor first flips over the ThunderTank and then ties up Panthro with his own shoulder spikes. During this time, the ThunderKittens have gone back to the Ruined Temple in hopes of finding a way to defeat Mongor. Upon carefully observing the runic symbols on the stone slab, the two discover that the only way to defeat the goat demon is to avoidlooking at him directly.

Having grown to three times his original size by feeding on the fear of the defeated ThunderCats, Mongor challenges Lion-O and the two fight it out in an epic duel. Inspite of Lion-O's courage and skills, Mongor's sheer size and strength are too mcuh for the young lord to handle. Fortunately, the ThunderKittens arrive at the scene on their Spaceboards and reveal the secret to defeating Mongor to Lion-O. Using one of their Trick Pellets to blow bubbles and distract Mongor, the twins give Lion-O a chance to attack him. By turning his back to Mongor, Lion-O uses his Claw Shield as a mirror to see Mongor's reflection and hits him hard with a powerful beam from his sword. A few more such shots shrinks Mongor back to his original size and the defeated demon retreats to his tomb. 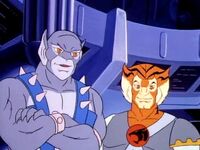 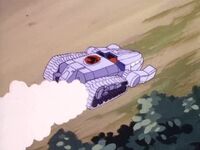 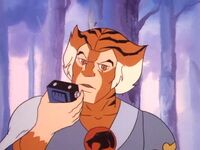 Mongor: No creature, no structure, no Third Earthling will escape the wra-a-ath of Mongor!
Mumm-Ra: Mongor terrorizes Third Earth, and wherever he finds fear, he grows in power and strength! Soon, he will be fit to destroy the Thundercats!

Mongor (to Tygra): You fool! Fire cannot harm me!
Mongor (to Cheetara): Cute trick, Thundercat! But only a trick!

(while reading the carvings in Mongor's tomb)
WilyKat: Looks as if you can get him... by kind of redirecting his forces back at him!
WilyKit: See these figures that are reflecting his power? They've all got their backs to him!

Retrieved from "https://thundercats-ho.fandom.com/wiki/Mongor_(episode)?oldid=28052"
Community content is available under CC-BY-SA unless otherwise noted.