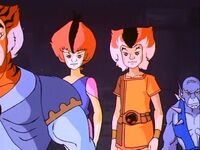 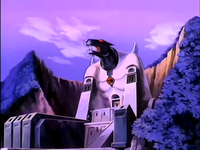 
Mumm-Ra: You rule Third Earth. But it is a kingdom you will never see, because you can never leave my pyramid. That is the price of your power, Monkian.


Cheetara: Why don't I drive home? Looks like you've had a busy day.


Lion-O: I've got to admit it, that was a close one.
Snarf: Close? If you guys hadn't shown up, it would've been our last one.

Retrieved from "https://thundercats-ho.fandom.com/wiki/Monkian%27s_Bargain?oldid=31215"
Community content is available under CC-BY-SA unless otherwise noted.