Pumm-Ra is an episode from the original series of ThunderCats. Written by Julian P. Gardner, it originally aired on September 13, 1985.

Mumm-Ra transforms himself into a Puma (Pumm-Ra) and stages a fake heroic deed (saving Cheetara from the Mutants) in order to convince the ThunderCats that he is one of them, from their home planet of Thundera. He is accepted and almost succeeds in his evil plan to capture the Cats' Lair, but his energy force deserts him and he turns back to Mumm-Ra before the eyes of the ThunderCats.

In this episode the ThunderCats realize that trust must be earned, since first appearances may be deceiving. Learn to judge people by central characteristics and not superficially.

Another lesson involves responses to problems. When faced with a problem with an uncertain resolution, it is best not to act impulsively on instincts or to use physical strength alone. Reason and ingenuity are often called for, and they can generate the best means of reaching a goal.

When faced with interpersonal problems, the ability to defer acting and to engage in the processes of thinking about the situation is important in children. Some significant thinking skills are the capacity to generate alternative solutions to the problem, the capacity to consider the consequences of social acts, and the ability to articulate step-by-step means to reach a particular solution. These skills have been shown to be mediators of social adjustment in children. Training in exercising these cognitive skills will enhance children's social adjustment (Spivack, Platt, & Shure, 1976).

Panthro and Tygra are inside Cats Lair, using the fortress' powerful telescopes to scan the surrounding area. All appears quiet until they notice something moving very fast near a volcano. It turns out to be Cheetara, out for her normal morning run. As everything appears normal, Panthro and Tygra decide to head out in the ThunderTank to check out the volcano.

In the midst of her lap, Cheetara suddenly collapses. Jackalman and Monkian quickly put the unconscious ThunderCat on a crude stretcher and carry her away. It is soon revealed that the Mutants capturing Cheetara was all a part of Mumm-Ra's scheme. The mummy assumes the form of Pumm-Ra, a cat-like Thunderian. When Cheetara comes to her senses, Pumm-Ra is sitting beside her and claims that it was he who rescued her from the Mutants. He also concocts a story about his origin, claiming to hail from Thundera, just like Cheetara.

Back at Cats Lair, Cheetara introduces Pumm-Ra to the other ThunderCats. After hearing his story, Lion-O is overly eager to make Pumm-Ra into a ThunderCat but Panthro and Tygra decide to take a more cautious approach and give Pumm-Ra a week's time before taking any decisions. Pumm-Ra is taken to the lair's Guest Room while the other ThunderCats turn in for the night.

As the veil of darkness falls, Pumm-Ra gets busy. He first sabotages the lair and then the ThunderTank, ripping out most of the controls. He then starts searching for the Sword of Omens and with his knowledge of ancient locking techniques, he is able to unlock the Sword Chamber by turning a hidden stone and grabbing both the Sword and the Claw Shield.

As morning breaks, the ThunderCats head off to the Thundrillium fields to restock their fuel supplies, leaving Lion-O and Snarf to safeguard their fortress. Seizing the chance, Pumm-Ra uses the Cats Lair's electronic eyes to signal the Mutants who are hiding nearby to start their assault on the lair. He then tries to attack Lion-O using the Sword of Omens but as it can never be used for any evil purpose, lightning falls from the heavens and knocks the Sword and the Claw Shield out of Pumm-Ra's hands, and Lion-O quickly grabs the two items.

The Mutants use the ThunderTank to continue their onslaught but their assault is cut short by the arrival of the ThunderCats. The Cats make quick work of the Mutants who flee for their lives. Now left alone, Pumm-Ra runs inside the lair and locks the doors. Tygra infiltrates the lair using the Power Exhaust pipes despite the dangers involved. He clears the pipes just as Pumm-Ra turns on the lair's laser beams which would have incinerated Tygra had he still been inside the Exhaust pipe. Using his invisibility, Tygra quickly overpowers Pumm-Ra in the Main Control Room just as the remaining ThunderCats arrive. Outnumbered and defeated, Mumm-Ra assumes his true ever-living form and retreats back to the Black Pyramid. 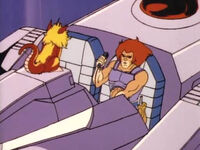 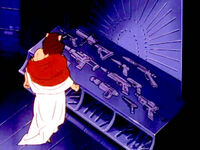 Slithe: I hope this works. Those cats are very clever, and I don't trust Mumm-Ra... but it is a good plan, so we wait and see, yes?

Pumm-Ra: They must all be asleep by now. So, while the Thundercats purr, Pumm-Ra pursues.

Jaga: Be not hasty in your decisions, Lion-O. Your instincts may be correct, but one does not make decisions by instinct alone. Let the facts weigh heavily on your mind and listen to your peers with caution.