Return to Thundera is an episode from the original series of ThunderCats. Written by Bob Haney, it originally aired on October 4, 1985.

The Mutants create Warbot, a Plun-Darrian war robot, to destroy Cats' Lair. Unaware of this, Lion-O enters the Time Capsule's hologram and travels back in time and space to his home planet Thundera. He arrives the day before the destruction of the planet, and all is in turmoil. Lion-O is reunited with his childhood pet, Kano, who leads him to his blind father, Claud-Us. Lion-O fights off S-S-Slithe and Vultureman who menace Claud-Us for the stolen plans of the Warbot. Claud-Us gives Lion-O the plans. Claud-Us remains on Thundera and Lion-O travels back to Third Earth through the hologram to find the ThunderCats battling the Warbot. Lion-O utilizes Claud-Us' secret plans to pierce the Warbot's absorber disc, short-circuiting and destroying the monster robot.

Lion-O, as Lord of the ThunderCats, shows curiosity to learn of his heritage. By traveling back in the time capsule, he seeks to learn about the culture of his ancestors. It was this culture that engendered the code by which he and the other ThunderCats live and which serves as their sustaining force. Lion-O's interest and journey is rewarded with some technical knowledge and a lesson. The plans of the Warbot help him defeat the Mutants' plans to destroy the ThunderCats. And the lesson is that history can be a significant teacher. An awareness of one's heritage and the events that shaped the present can aid us in understanding and living in the present and in avoiding mistakes in building a better future.

In seeking to find out about his heritage, Lion-O is confirming his identity as a ThunderCat. One's identity is socially bestowed, socially sustained, and socially transformed. It is the process of socialization by which individuals become prepared for the roles they will play in society. Children become socialized by various agencies within society, such as the family, peer groups, the media and the school system. The beginnings of the child's appreciation of roles is achieved in his interactions with adults and peers as he perceives different roles are required in different contexts and he learns to recognize the expectations of others in his own behavior.

On a dark and dreary night, the Mutants invite Mumm-Ra to their fortress, Castle Plun-Darr. Once inside, Slithe presses a few buttons on a remote control and giant doors open to reveal the massive Warbot, the most awesome invention of Plun-Darrian science. When Mumm-Ra questions its abilities, Slithe taps a few more buttons on his remote and makes the Warbot fire a shot at a sleeping Frog-Dog, turning it into a statue. Slithe assures the still skeptical Mumm-Ra that the Warbot is armed with a lot firepower and will succeed in destroying the ThunderCats. Slithe then orders the Warbot to head for Cats Lair and it trudges out.

Oblivious to the danger approaching them, the ThunderCats are examining the Time Capsule that they had retrieved from the Caveman earlier. Panthro switches on the device and the ThunderCats are amazed at the beautiful imagery of Thundera that it projects. Later, when all the ThunderCats have gone to sleep, Lion-O switches on the Time Capsule. Not realizing that he is standing right infront of the projector, the hologram inexplicably sends him back in time and space to Thundera, just one day before the destruction of the planet.

As the Warbot nears the Cats Lair, the fortress' automatic alarm goes off, waking up all the ThunderCats who assemble in the Main Control Room. The Cats are shocked upon seeing the massive robot, correctly guessing that Slithe and the Mutants are behind it. Panthro launches a number of offensive attacks on the Warbot, including Laser Beams, and fire, ice, missiles and massive chains using the Ballista, but the Warbot repels all the attacks.

Meanwhile, Lion-O, who is wandering around on Thundera, first encounters a Giant Scorpion, whom he manages to luckily escape. Then he encounters Kano, a saber-tooth cat who was his pet when he was a young boy back on Thundera. Kano leads Lion-O to his blind father, Claudus, who has been cornered by Slithe and Vultureman. The Mutant duo quickly flee the scene when Lion-O arrives and gives them a taste of the powers of the Sword of Omens. After Lion-O convinces Claudus that he really is his son, the elderly ThunderCats hands Lion-O the plans of the Plun-Darrian Warbot, the thing that the two Mutants were looking for. Despite Lion-O's pleas, Claudus refuses to leave with his son as he has to stay in order to boost the guidance system on the Flagship that will eventually take the ThunderCats to Third Earth. With a heavy heart, Lion-O bids his father goodbye and leaves.

Back in the present time on Third Earth, the Warbot is wreaking havoc on the Cats Lair. Using specialized chains with "magnetos" that adhere to stone, the Warbot rips the lair's head clean off. It then leaps onto the damaged fortress and, just like the Frogdog, turns all the ThunderCats to statues. Fortunately, help is close at hand as Lion-O returns from Thundera at that moment. Using the power of the Sword of Omens, he un-freezes his friends and then blasts the Warbot, sending it reeling back. Climbing into the Ballista, Lion-O shoots out of the lair and lands right next to the Warbot. Thanks to the plans that were given to him by Claudus, Lion-O knows the Warbot's weak spot, a tiny red disc located underneath the mechanical monster's feet. Just as the Warbot tries to pulverize Lion-O under its gigantic foot, the swift Cat stabs the Warbot's weak spot with the sword, causing the entire robot to explode. 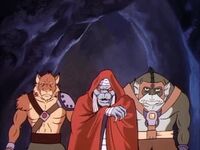 Claudus: I lost my sight fighting your evil empire. Do you think I fear two such as you?
Slithe: You cannot see, but you can feel!

Panthro: Mountains of Thundera! Look at this, ThunderCats!
Cheetara: A giant robot.
WilyKat: Yeah, a nightmare version of that reptilian rascal Slithe!

Claudus: I thank you for your help. May my son Lion-O grow up to be as brave and noble as you, and carry on the code of Thundera.
Claudus, Lion-O: (clasping each other's wrists) Truth, justice, honor, loyalty.
Claudus: The tremors grow worse. Go, while you still can.
Lion-O: (exits and looks back at him) Farewell, Father.

Lion-O: (talking about Claudus) I should have saved him. I tried, but he wouldn't leave.
Panthro: No, Lion-O. There was nothing you could do. No one can change history. We can only learn from it.

Retrieved from "https://thundercats-ho.fandom.com/wiki/Return_to_Thundera?oldid=24837"
Community content is available under CC-BY-SA unless otherwise noted.