The Astral Prison is an episode from the original series of ThunderCats. Written by Peter Lawrence, it originally aired on October 8, 1985.

Jaga is captured by Nemex, the Astral Imprisoner. Only Lion-O can save him. He enlists the Netherwitch to transport him to the Astral World. Unknown to him, the Netherwitch is another manifestation of Mumm-Ra. Having trapped Lion-O in the Astral World, Mumm-Ra encourages the Mutants to attack the Cats' Lair, using Vultureman's Thundrainium Cannon. Lion-O succeeds in rescuing Jaga from Nemex. At the same time, he frees Brodo, an ancient wizard and long-time enemy of Mumm-Ra. Brodo is able to return Lion-O to Third Earth in time to destroy the Thundranium Cannon, rally the ThunderCats and defeat the Mutants.

Lion-O displays great bravery and inner strength in confronting the unknown. He is willing to take the risks demanded for the sake of rescuing Jaga, who in captivity in the Astral World is resisting the efforts of Nemex to deprive him of his knowledge and autonomy. Lion-O enters into the world of the spirit where things are less tangible to him than matter. For us, it sometimes takes great courage to enter into our own inner world of feelings and emotions when we encounter our wishes and fears. Often these are unknown and unclear to us. Only when we acknowledge this feeling side of ourselves can we integrate the wishes and fears into our lives. If we do not face them, we run the risk of being in conflict with ourselves and, like Jaga in captivity, of losing our self-determination by being dominated by our inner impulses. Acknowledging our emotions allows us to integrate them into our lives and be in control of our feelings and actions.

A second lesson that is revealed in this episode involves reciprocity in giving to and taking from others. Lion-O is led to the choice of helping Jaga because of the gratitude he feels as a consequence of all he has been given by Jaga. And Brodo, who owes his freedom to Lion-O, compensates him by returning him to Third Earth. We should be aware of those who have given to us and be prepared to give back to them and acknowledge our gratitude.

While sleeping peacefully in his Bedroom inside Cats Lair, Lion-O is suddenly awakened by the Sword of Omens' warning growls. Upon using "Sight Beyond Sight", Lion-O learns that Jaga has been taken prisoner in the Astral World by a strange creature known as Nemex. Wanting to forcefully extract all of Jaga's knowledge and wisdom, Nemex intends to keep him imprisoned for all eternity. After Lion-O tells the others about Jaga, they all rush off to see the only person on Third Earth who understands the Astral World, the Netherwitch. However, the ThunderCats are unaware the Netherwitch is none other Mumm-Ra himself.

When the ThunderCats arrive at their destination in the ThunderTank, Lion-O insists that he alone must rescue Jaga from the Astral World. Reluctantly, the others agree and return back to the lair. As Lion-O makes his way to the Pit of the Netherwitch, which lies on the opposite bank of the River of Despair, he starts to cross the Bridge of Slime. However, his presence does not go unnoticed and the two-headed Gaw-Rak-Rak attacks Lion-O. Using some fancy acrobatics, Lion-O succeeds in crossing the bridge and entering the pit.

Inside the creepy Castle Plun-Darr, the Mutants are busy working on completing the Thundrainium Cannon that Vultureman has invented. Their conversation reveals that they were informed by Mumm-Ra about what has transpired with the ThunderCats. With Lion-O out of the way, the Mutants capitalize on the opportunity to attack Cats Lair. Piloting the SkyCutters, NoseDiver and the newly created Thundrainium Cannon, the Mutants head out to carry out their evil plan.

Meanwhile, Lion-O is struggling to locate the Netherwitch in the dark and dreary cavern. He comes across numerous weird ghostly apparitions, including a three-eyed dinosaur. Eventually he manages to locate the sorceress and asks her to teleport him to the Astral World. The Netherwitch warns him that it is a one way trip from which there is no coming back. Lion-O agrees and the Netherwitch begins her chanting. Just as Lion-O's physical self starts to disappearing, the Netherwitch changes to a very pleased Mumm-Ra, making Lion-O realize that he has been deceived by the evil mummy.

Lion-O re-materializes in the strange Astral World. He locates the Astral Prison and begins climbing the steep crystalline walls of the prison using his Claw Line. Suddenly he notices a bubbling in the moat below him and a strange blue-skinned, red-winged monster lunges at him, missing him by inches. The Astral Moat Monster then begins to scale the wall by sinking its sharp claws into it, heading straight for Lion-O. The young lord dispatches the creature by zapping it with his sword, making it drop back into the moat.

Lion-O makes his way to Jaga's cell but before he can free him, Nemex arrives. The diminutive figure grows into a giant and fires a barrage of energy beams at Lion-O from his eyes and hands. The Lord of the ThunderCats uses the Sword of Omens to give Nemex a taste of his own medicine and knocks him out cold. As the two ThunderCats are escaping from the prison, cries of help lead them to a cell where they find another inmate, Brodo. Once a powerful wizard, Brodo, like Lion-O, was tricked my Mumm-Ra who transported him to the Astral World and he has been a prisoner ever since. Using the Claw Line, the three escapees successfully swing out of the prison.

Once outside and free, Jaga's happiness at seeing his protege quickly turns to grief when Lion-O reveals that he will never be able to return back to Third Earth. At that moment, the sword's "Sight Beyond Sight" shows Lion-O images of Cats Lair under heavy attack from the Mutants. The Thundrainium Cannon bombarding the lair causes the entire fortress to be filled with Thundrainium fumes, weakening the ThunderCats and rendering them unable to fight off the attack. Feeling helpless and dismayed at not being able to help the ThunderCats, Lion-O's spirits are rekindled when Brodo decides to use his powers to teleport Lion-O back to Third Earth.

Just when it seems like the Mutants have finally won, Lion-O materializes outside Cats Lair and with one powerful swoop of the sword, slices the Thundrainium Cannon in two. No longer under the attack of Thundrainium Shells and the sight of their brave leader, infuses the ThunderCats with new strength and they beat the Mutants with ease. 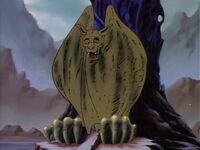 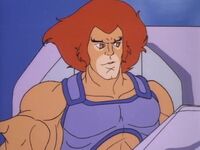 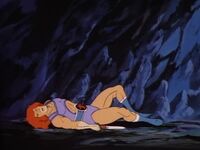 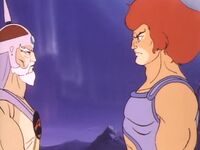 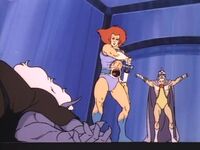 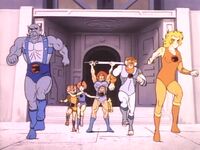 Lion-O: I have to help him, but how?
Tygra: The problem is how to find Jaga!
Panthro: We have to find some way of communicating with him.
Cheetara: We need someone, something, that understands the Astral World.
WilyKat: There's only one person like that on Third Earth!
WilyKit: The Netherwitch!

Slithe: With Lion-O out of the way, we'll never have a better chance to smash the ThunderCats once and for all!
Jackalman: If he is out of the way...
Slithe: Why should Mumm-Ra lie? It's not in his interest! (Jackalman drops a wheel on Monkian's foot)
Monkian: Watch what you're doing, you cowardly wretch!
Vultureman: Relax, Jackalman! Those ThunderCats don't stand a chance against the Thundrainium Cannon!


Lion-O: Cats' Lair is being destroyed! They need me, Jaga, and I'm stuck here!
Brodo: I can get you back there!
Lion-O: Will you do it, Brodo?
Brodo: If it will repay you for saving me... (begins chanting) Ancient spirits of good, transport this young Lion-O back to his own world!

Jaga: I owe my freedom to your bravery, Lion-O.
Lion-O: I don't think I'd have been so brave if I had known what I was getting into in the astral world.
Jaga: But you did confront the unknown, Lion-O. That takes real courage. It's always easier to deal with dangers that you know, and understand.
Lion-O: Well, I couldn't just stand by and watch, Jaga. I had to do something.

Retrieved from "https://thundercats-ho.fandom.com/wiki/The_Astral_Prison?oldid=28045"
Community content is available under CC-BY-SA unless otherwise noted.