The Crystal Queen is an episode from the original series of ThunderCats. Written by Leonard Starr, it originally aired on October 9, 1985.

Tartara, the Crystal Queen, steals the Ariettabird and cages it in her Crystal Kingdom. The Ariettabird's beautiful song brings a fruitful harvest to the Berbils and now without it, their crops will die. Lion-O pursues Tartara, but she freezes him in a transparent case of crystal. Snarf follows to the Kingdom, frees the Ariettabird, and requests that it sing its highest notes. Lion-O's cage shatters with the bird's high-pitched song and he signals the other ThunderCats with the Sword's Eye. Panthro arrives in the ThunderTank to rescue Lion-O and Snarf. The Ariettabird escapes and returns to the Berbil village, assuring them of another fruit-filled season.

Everyone is entitled to a place and function in society and the right to serve a useful purpose, even if it is not readily apparent in a superficial assessment. Lion-O and the other ThunderCats begin to cut down Snarf's responsibilities and deprive him of feeling useful, when he begins to show signs of aging by being absent-minded at times. Snarf responds with a discrimination to remain necessary, and he is able to show through his participation in a successful mission that he still can contribute. Aging persons still have much to contribute if we allow them.

One way persons of all ages contribute and feel necessary is through giving. Animals, like the Ariettabird, freely respond to their place in the balance of nature by playing their appropriate roles. The Ariettabird's role is helping to produce a fruitful harvest of Berbilfruit by singing. For persons, it is giving to others and making a contribution to society. This is in contrast to Tartara, who never learned the pleasures of sharing. Instead, she hoarded treasures and therefore never felt necessary or part of a group. We should accept the treasures of human companionship and seek to play a role in contributing to society. Then we will find in our giving to and receiving from others that we are useful and necessary.

One fine night, a bright object speedily streaks through the sky, catching the eyes of Lion-O and Panthro who are driving in the ThunderTank. When they try to pursue the object, the tank stalls all of a sudden. When Panthro checks it, the culprit turns out to be the depleted Thundrillium Module which Snarf was entrusted with recharging. As Panthro makes his way to the Cats Lair to get a spare, Lion-O stands guard by the tank. At the lair, the other ThunderCats are having dinner when Panthro arrives and retrieves the spare module. Despite him assuring Snarf that Lion-O is safe and that they will be returning shortly, Snarf's intuition tells him otherwise and he secretly follows Panthro.

In the mean time, Lion-O heads to the nearby Berbil Village after he hears strange singing sounds coming from there. Once in the village, he is amazed at the sight of the beautiful Arietta Bird. All the Berbils have gathered around the bird, listening to its song. Ro-Bear Bill tells Lion-O that the bird's melodious singing helps to ripen their Berbil Fruits, ensuring a good harvest for them. Upon Lion-O's asking, Ro-Bear Bill reveals that there are very few Arietta Birds left, and the one that they are listening to might just be the last of its kind.

Without warning, the bright object that Lion-O and Panthro had seen earlier zooms onto the scene. Ro-Bear Bill identifies it as the Flying Jet-Sleigh, belonging to Queen Tartara, ruler of the Crystal Kingdom. The selfish queen is always seeking to capture the Arietta Bird, wanting it to sing for her only. The sleigh zooms in closer and one of Queen Tartara's Guards grabs the Arietta Bird. As the sleigh is flying away to the Crystal Kingdom, Lion-O manages to jump up and grab onto the vehicle.

Panthro returns shortly, and upon not seeing Lion-O, heads to the Berbil Village. After learning all that has transpired from Ro-Bear Bill, Panthro speeds off to rescue Lion-O. However, Panthro is unaware that Snarf, who had overheard the conversation between him and Ro-Bear Bill, has secretly stowed away in the ThunderTank. Panthro eventually discovers Snarf when he stops the tank halfway up the mountain. He tells Snarf to wait for him while he checks out the two paths leading up the mountain. But Snarf, who has noticed Lion-O's footprints in the snow, rushes off following them.

After some difficulty, Lion-O eventually manages to reach the Crystal Kingdom and sneaks in pretending to be one fo the guards. He reaches the Treasure Room where the Arietta Bird is caged and while he tries to free her, Queen Tartara and her guards arrive. Before Lion-O can use the Sword of Omens to defend himself, the queen fires an icy balst from her hands, encasing Lion-O in a huge crystal. Snarf, who had been trailing Lion-O's footprints, eventually makes his way to the Treasure room where both Lion-O and the Arietta Bird are being held captive. After a few failed attempts at trying to break the crystal encasing Lion-O, Snarf uses the Arietta Bird's high-pitched singing to shatter it to pieces. Lion-O then uses the sword to call the other ThunderCats and Panthro arrives at the scene, crashing through the palace in the ThunderTank. As the palace starts to collaps, the Arietta Bird flies away while the three ThunderCats speed off in the tank. 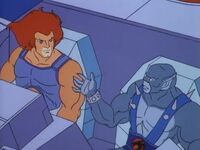 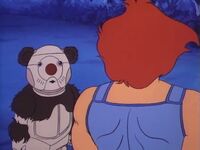 Snarf (talking to himself): 'There's no need'! 'Don't bother, Snarf!' I'm not good for anything any more,that's what they think! (pause) I've got, like, a feeling! A bad feeling! Lion-O! I have to get where he is, and nobody can stop me!

RoBear Bill: Oh. It's Queen Tartara again. She's always trying to steal the Arietta Bird for the Crystal Kingdom. She wants it to sing for her alone.
Lion-O: Why, that's the most selfish thing I ever heard!
RoBear Bill: Yes. Isn't it sad. She never learned that the greatest pleasure comes from sharing.
Lion-O: Well, I'm not about to wait until she learns!

Lion-O: Jaga says there's always a benefit in misfortune. Hard to see what benefit that poor devil got out of this. But at least I won't freeze.

Snarf: Hey you're the bird, aren't you? The one who caused all this trouble.
(it nods and sings)
Snarf: Uh-uh, no use tryin' to win me over. I'm tone-deaf.


Lion-O: We couldn't have done it without you.
Snarf: See? Old Snarf just gets better with age.
(everyone laughs)

Retrieved from "https://thundercats-ho.fandom.com/wiki/The_Crystal_Queen?oldid=24849"
Community content is available under CC-BY-SA unless otherwise noted.