The Doomgaze is an episode from the original series of ThunderCats. Written by Stephen Perry, it originally aired on September 24, 1985.

Mumm-Ra allies with the Egyptian princess Ta-She to gain the Doomgaze, an entrancing power, which could enslave the ThunderCats. To free her from the Timewarp Prison, they need three elements: a tuft of Cheetara's hair, a Unicorn's golden shoe, and a Berbil's tear. The Mutants, aided by a Man-O-War Cloud, gather the elements and kidnap Ro-Bear Belle. The ThunderCats pursue through the Desert of Phosphorous Sands, the Crumbling Cliffs of Vertigo, and the Field of Daggers. As Ta-She's freeing ritual begins on Mount Anguish, the ThunderCats attack. Ta-She needs Lion-O as the hero who will take her place in the Timewarp and uses the Doomgaze to enrapture him. Cheetara (a woman herself) is not mesmerized by the princess' beauty and brings Lion-O out of the trance. Defeated, Ta-She fades back into her prison and Mumm-Ra angrily disappears into the darkening skies.

Lion-O becomes infatuated by Ta-She's beauty and falls under her hypnotic spell. Even in the face of imminent danger to himself, Ro-Ber-Belle, and the other ThunderCats, he is unable to see through her appearance and grasp the essential evil beneath her charm. Only when rescued by Cheetara does he regain his judgment, discern the superficiality of her looks, and reflect on the dissimilarities between them.

Attraction between friends in early stages of childhood may be based on superficial characteristics like geographical location or favorite activities. As children grow older, other factors become significant like interests, cooperative behavior, and sharing possessions. Approaching adolescence, central characteristics like intimacy and loyalty become important and personal similarities in behaviors and attitudes are hallmarks of lasting friendships (Kandel, 1978).

Upon Mumm-Ra's invocation, Nemesis, the force of darkness, advises him to join forces with Ta-She, an ancient sorceress with the power of the Doomgaze, in order to vanquish the ThunderCats. The vile mummy then contacts Ta-She, who is imprisoned in the Time Warp Prison and she accepts his proposal but only if he frees her from her prison. Mumm-Ra agrees since he knows the key to unlock the prison, which comprises of a tuft of a cheetah's hair, the tear drop of a Berbil, an enchanted unicorn's shoe, and finally a hero to take her place in the Time Warp prison.

Meanwhile, Lion-O and Panthro who are training just outside of Cats Lair notice a dark cloud in the sky, traveling in the reverse direction as the other clouds. Using the Sword of Omens Lion-O learns that it is in fact a Man-O-War Cloud and heading directly towards the Berbil Village.

The airborne jellyfish grabs Ro-Bear Belle in one of its long tentacles and flies off. Because it is traveling so fast, Cheetara is the only one who can match its speed and so she chases it at super speed, leaving behind scratch marks on the bark of nearby trees so that the rest can follow her trail. However, her chase is cut short when she runs right into a net set by Slithe. The reptilian cuts off a clump of her hair before the Man-O-War Cloud snatches him as well.

As Lion-O and Snarf continue their pursuit they witness Jackalman removing one shoe from a Unicorn before running away. Lion-O's suspicion that Mumm-Ra is the mastermind of all the strange happenings is confirmed by the Sword of Omens' vision. Now aware that the mummy and his cronies have assembled at the top of Mount Anguish, Lion-O instructs Cheetara to reach there via the Phosphorus Desert while he and Snarf take the more dangerous route by climbing the Crumbling Cliffs of Vertigo.

When they arrive at Mount Anguish, Mumm-Ra has already started the ceremony of freeing Ta-She from the Time Warp Prison. When Lion-O tries to stop the proceedings and manages to call the ThunderCats before Ta-She has him spellbound with the power of her Doomgaze. Being a woman, Cheetara is not affected by Ta-She's mesmerizing gaze and she manages to send the sorceress back to her prison while also taking on the Mutants in battle. Shortly, the remaining ThunderCats, who had been delayed when the ThunderTank got stuck in the Field of Daggers, arrive and make quick work of the Mutants. Realizing that he is outmatched and outnumbered, Mumm-Ra retreats to the Black Pyramid. 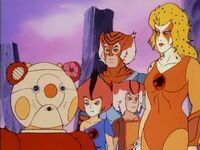 Mumm-Ra: Nemesis, force of darkness, come to the aid of Mumm-Ra! Give me the power to overcome the ThunderCats and rule in darkness over the Third Earth. Tell me the secret force of darkness!
Nemesis: You must summon the Princess Ta-She. Free her from the Time Warp Prison and she will share with you the power of Doomgaze. Summon Ta-She now, Mumm-Ra! Call her to you!

(after Slithe entraps Cheetara in a net)
Cheetara: Slithe! You slimy reptilian, I might have known you were part of this.
Slithe: Silence, catwoman! A tuft of a cheetah's hair, yesss...

Snarf: This just gets stranger and stranger!
Cheetara: Then the Man-O-War cloud helped him escape.
Lion-O: Hmm, only one person, one thing could be behind all this, Mumm-Ra!

(after defeating and tying up Monkian)
Cheetara: Maybe that will teach you to monkey with the ThunderCats, Mutant!

Mumm-Ra: Now, I have you, Lord of the ThunderCats, helpless in the power of the Doomgaze! Soon you will be imprisoned in the Time Warp, roaming time and space for eternity while we rule the Third Earth and the universe!
Snarf: You still got Snarf to deal with!
Ta-She: Puny creature, you may join your heroic master in his eternal prison!

Retrieved from "https://thundercats-ho.fandom.com/wiki/The_Doomgaze?oldid=32089"
Community content is available under CC-BY-SA unless otherwise noted.