The Fireballs of Plun-Darr is an episode from the original series of ThunderCats. Written by William Overgard, it originally aired on September 30, 1985.

The Mutants bombard the Warrior Maidens' Treetop Kingdom with liquid fireballs mechanically launched from their new Firethrower. Tygra becomes invisible and sneaks into Castle Plun-Darr through the moat to investigate. He loses his Bolo, becomes visible and is strapped to the Four Winds catapult device by the Mutants. Lion-O, Snarf, and Willa, aided by Willa's pet spider, Bushy, scale the walls of Plun-Darr and rescue Tygra just in time. The Mutants accidentally explode their own serpent's head fuel room in their attempt to catch the fleeing ThunderCats.

The extremes of enmity and friendship are contrasted in this episode. The Mutants' indifference and disdain for the Warrior Maidens lead them to use the Treetop Kingdom as targets to perfect their weaponry. Willa reflects bitterly on how innocents are often victimized when wars break out. In contrast to the Mutants' disinterest are the sentiments of Tygra and Lion-O. Tygra is indignant over the firebombing and resolves to help the Warrior Maidens. Lion-O expresses marked concern and vigilance for his friend Tygra, as he is unable to take his safety for granted. In the end, by acting on their concern for others, they are able to destroy the Mutants' fireball launcher and affirm their friendship with Willa.

It is often easier to avoid becoming caught up in the plight of others or to take it for granted that things will work out. But friendship carries with it the responsibility of not remaining indifferent or passive in times of need. It also demands that we remain vigilant in our empathy for our friends and willing to take an active role in helping them.

When Tygra notices the area around the Treetop Kingdom ravaged by a fierce fire, he rushes to look into it. He runs into Willa who informs him that giant fireballs have been raining on the Warrior Maidens' domain since daybreak. Before she can continue, a SkyCutter swoops into the scene with Monkian at the controls. The Mutant fires on them but Tygra succeeds in yanking the simian from the SkyCutter. Monkian's assault further fuels Tygra's suspicion that the Mutants are responsible for the devastation, and he and Willa make tracks for Castle Plun-Darr.

Arriving at the Mutants' fortress shortly, Tygra uses his invisibility to sneak into the stronghold via the moat. Unfortunately, the Mutants had infused the waters of the moat with a chemical known as Phospho-R, which clung to Tygra's body making him visible to them. Immediately Slithe goes into the moat, piloting the NoseDiver and tries to chew up Tygra using the vehicles roto-grinder. Tygra manages to avoid and disable the NoseDiver but ends up getting caught in a cage that the Mutants had placed inside the intake pipe. Now a prisoner, Tygra is bound by the Mutants to the Four Winds, an ancient torture device that is designed to rip its victim's limbs apart. Slithe fixes a Solar Mirror to the main control of the Four Winds so that it would get activated immediately when the sun's rays strike it.

Meanwhile inside Cats Lair, Lion-O is growing increasingly worried about Tygra's absence. His fears are confirmed by the Sword of Omens which shows him Tygra's predicament. Within an instant the young lord descends down the walls of the Cats Lair using the Claw Shield and runs off to help his friend. When he reaches Castle Plun-Darr, Willa tells him all that has happened. When Lion-O tries to reach for his Claw Shield in order to scale the castle walls, he realizes that he forgot the Claw Shield back at the lair. Fortunately, Willa has another climbing aid, a Giant Treetop Spider that she affectionately calls "Bushy" due to his furry coat. The arachnid is up the walls in a flash, leaving behind a strong web strand which Lion-O and Willa use to climb up.

The two enter the castle and rescue Tygra just as the Four Winds was about to be activated. They are pursued by a mob of Mutants and the trio lock themselves inside one of the rooms of Castle Plun-Darr. The chamber turns out to be the place where the Fireball Launcher is kept. As Slithe and Monkian begin to melt the door of the room using a Flame Thrower, Lion-O summons the other ThunderCats who arrive swiftly in the ThunderTank and fire Cable Pulleys into the room with their friends. The trio slide out on the pulleys just as the fire from the Flamethrower accidentally lights up the fuel, and the resulting blast not only vaporizes the Fireball Launcher but ends up incinerating much of the Mutants' fortress as well. The ThunderCats and Willa watch the massive explosions from the ThunderTank as they drive home. 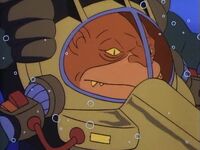 Willa: I've been chasing shadows all day since the bombardment. Our world has changed since you and the Mutants arrived.

Tygra: That Mutant Monkian must have been a spotter for the gunners. Let's find the source of these firebomb attacks. Together we may be able to stop them and save your trees.
Willa: Alright. But where do we look?
Tygra: Straight into the very soul of evil, Castle Plun-Darr!

Lion-O: I didn't sleep, Snarf. I'm worried about Tygra.
Snarf: Ah, snarf! Tygra's capable of taking care of himself, don't you think?
Lion-O: Snarf, a friend is someone who worries about you, who cares. I'd feel terrible if I didn't obey my instincts and something bad happened to Tygra.

Slithe: To show you we're not all that crude, think about this. When the first rays of the sun strike this solar mirror, it will trigger the catapults. Yesss, it looks like it's going to be a bright, sunny day!.

Retrieved from "https://thundercats-ho.fandom.com/wiki/The_Fireballs_of_Plun-Darr?oldid=28049"
Community content is available under CC-BY-SA unless otherwise noted.