The Ghost Warrior is an episode from the original series of ThunderCats. Written by Leonard Starr, it originally aired on September 23, 1985.

While looking for valuables in an abandoned tomb, two Bolkins (short sheep-faced beings) accidentally release a ghostly renegade named Grune. Stealing into the Cats' Lair, Grune drains the fortress of their power source Thundrillium and goes on to destroy a Wollo village and forge a mighty weapon from a fire-rock of Thundrainium, a unique substance that weakens the ThunderCats. Jaga appears to wage a final battle with Grune, having fought with him long before on the planet Thundera. Weakened by the Thundrainium, Jaga is losing. Lion-O risks his life and projects all his strength into Jaga's failing form, tossing him the Sword of Omens. With this boost of ThunderCat power, Jaga defeats the ghostly warrior, blasting Grune into nothingness. Jaga returns the Sword to Lion-O just in time for the Lord of the ThunderCats to survive.

The decision by the Bolkins to commit wrongdoing for economic gain results in unforeseen negative consequences by releasing Grune, the former ThunderCat. Grune has betrayed the Code of Thundera for the sake of greed and self-advancement. When Grune threatens to destroy the ThunderCats and wreak revenge on Jaga, Lion-O and Cheetara make life-threatening sacrifices to help Jaga and defend their society. Jaga ultimately permits Grune to determine his own destruction by honestly revealing his evil intentions rather than letting him pose as a false friend.

This episode illustrates that the skills and talents each of us possess must be appraised honestly, based on our performance. And our skills must be used appropriately for the welfare of all and not for our own selfish motives. The heroic sacrifices and appropriate use of talents and skills of Cheetara, Lion-O, and Jaga counter Grune’s ruthlessness and misuse of his talents and gifts. The cohesiveness and welfare of society depends on every individual's contributions to the common good.

One night, two young Bolkins are caught in the midst of a raging thunderstorm. Seeking respite from the unrelenting rain, the two hide beneath a nearby tree. Suddenly, a fiery lightning bolt falls on the tree, splitting it right across the middle, and uncovering a secret chamber beneath it. Hoping to find some concealed treasure or valuables, the two enter the chamber, but instead end up accidentally freeing the spirit of Grune the Destroyer, an evil being who many eons ago had wreaked havoc on the planet.

Weakened from centuries of imprisonment, Grune seeks out Thundrillium in order to strengthen himself. In his search, he comes across Cats Lair, surprised to find such a fortress on Third Earth. He enters the lair and starts absorbing the lair's Thundrillium stores while the ThunderCats try desperately to figure out what is causing all the paranormal activities. With his strength gained, Grune materializes in front of the ThunderCats, taunting them and eventually leaving with the promise of meeting again soon.

The following day, Grune begins his reign of terror on Third Earth by demolishing the settlements of various gentle races including the Bolkins, the Wollos and the Berbils. He demands that they bring him "Fire Rocks", a highly unstable substance whose mining had been banned for many centuries. The terrified inhabitants ask the ThunderCats for help, informing them about Grune's demands. Tygra immediately recognizes Fire Rocks as being the same as Thundrainium. Remembering the location of the Thundrainium Pits, Grune heads there and forges a Battle Club from the material.

Back inside the lair, the ThunderCats are still trying to figure out who or what Grune is. Even the Sword of Omens' "Sight Beyond Sight" fails to shed any light on the situation. Not surprising as the sword does not posess any psychic powers, as Tygra points out. Cheetara then reveals that she does possess psychic powers, her Sixth Sense, which allows her to see visions, but harnessing it is very taxing on her, taking her weeks ot even months to recover. But forsaking the risks, she invokes her psychic powers which reveal that Grune was once a ThunderCat and friend of Jaga. Having fought many battles together against enemies of Thundera, Grune was eventually overcome by greed and turned evil. It was thus up to Jaga to defeat Grune and banish him for good. Panthro reckons that Grune's spaceship must have ended up on Third Earth somehow, thus explaining his presence on the planet.

A giant Grune then starts hammering Cats Lair with his newly forged Battle Club, rattling everyone inside. Now aware of his true origin, Lion-O summons Jaga, something which Grune wanted all along, to have a rematch with his former ally. As the two spirits battle it out, Grune succeeds in disarming Jaga but Lion-O throws his mentor his Sword of Omens. As the battle rages on, Jaga gets weakened by the Thundrainium radiation from Grune's Battle Club. Lion-O commands Jaga to take his strength, and the elder ThunderCat is then able to easily dispatch Grune, banishing him again. With the enemy vanquished, Jaga returns Lion-O's strength and his sword back. 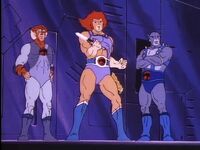 Hurrick: Those symbols were carved here, to ward off evil.
Bundun: We're not evil. Just poor!

Panthro: Stronger than me? Not likely!

Grune: So this is what becomes of the Thundercats?
WilyKit: Lion-O! It's a ghost!
Cheetara: And it knows who we are!


Wollo Traveller: It was Grune the Destroyer, Thundercats. He's come back to Third Earth!
Bolkin: It had to be him. There's no mistaking that single saber-tooth!

Lion-O: You've... won, Jaga. As I knew you must.
Jaga: No, Lion-O. It was the strength of the Lord of the ThunderCats who won this day.