The Spaceship Beneath the Sands

The Spaceship Beneath the Sands is an episode from the original series of ThunderCats. Written by Leonard Starr, it originally aired on September 26, 1985.

Mumm-Ra raises the Mutants' buried spaceship from beneath the Desert of Sinking Sands. The Mutants regain their super-weapons (SkyCutters and NoseDiver flying machines) and attack the ThunderCats. Lion-O and Panthro pursue the NoseDiver underwater with the ThunderTank. They encounter a Giant Eel and, with the help of parent Sea-Quines, they rescue a baby Sea-Quine pinned beneath the tank. The Mutants are defeated, but retain their super vehicles and return to Mumm-Ra's tomb to plan a next assault.

In the midst of a struggle with the Mutants, a baby Sea-Quine's life is endangered when it becomes trapped beneath the ThunderTank. Despite the risk of losing the ThunderTank, Lion-O and Panthro work feverishly and cleverly to save the Sea-Quine. Their efforts in response to the danger of a loss of life show respect for the value of life. Their actions and sentiments stand in contrast to and offer a reply to a question raised by the materialistic Tabbut early in the episode, "What good is my life without money?" Life itself has an intrinsic value and it is to be fostered and protected assiduously.

The Mutants ambush a traveling Tabbut and steal his bag of money. His screams are heard by Tygra and Cheetara who rush to the scene to help. It turns out, this is what the Mutants wanted all along and the duo are ensnared in a sticky net as soon as they arrive, courtesy of Monkian who was lying in wait with it on a branch above them. Unfortunately for the Mutants, their plan fails when Lion-O and Panthro come on the scene driving the ThunderTank and using the vehicles maneuverable jaws, free their comrades. The Mutants are left with no choice but to beat a hasty retreat.

While licking their wounds back at Castle Plun-Darr, the Mutants come to the conclusion that the ThunderCats' constant victories over them can be attributed to the fact that the Cats were able to successfully build advanced weapons and equipment from the materials that they salvaged from their Flagship while the Mutants' weapons and technology remain hidden under the Desert of Sinking Sands, courtesy of Mumm-Ra. With high hopes and determination, the Mutants assemble in the Black Pyramid and after much reasoning and grovelling, they succeed in convincing Mumm-Ra to raise their ship from which they manage to retrieve the NoseDiver as well as two SkyCutters and other equipment and take them all to their castle.

Now with their technology restored, the Mutants launch an all out assault on the ThunderCats, bombarding Cats Lair with fire from their vehicles. The Cats retaliate with their own attack. Panthro and Lion-O take the ThunderTank to pursue Slithe who is piloting the NoseDiver while the rest of the team focus on attacking the SkyCutters with Jackalman and Monkian at the wheels.

Slithe leads his pursuers over a cliff and straight into the ocean where his vehicle can navigate just as easily on land, but the tank drops like a stone, eventually getting stuck among the undersea rock formations. Thanks to a pair of Underwater Breathing Devices stashed under their seats, Lion-O and Panthro manage to exit the upturned tank. As they try to free the vehicle, Slithe welcomes them with a hail of gunfire. This time, it is the Cats turn to trick their opponent and they lead Slithe into the cave of a Giant Eel, avoiding whom results in Slithe damaging the NoseDiver and fleeing the scene.

As soon as Lion-O and Panthro emerge from the ocean, they are attacked by Jackalman and Monkian in the SkyCutters. Lion-O then summons his friends before diving back into the ocean with Panthro. The other ThunderCats arrive shortly and make quick work of the two meddlesome Mutants. As Panthro and Lion-O try to once again free the ThunderTank, they are assaulted by two Sea-Quines, large seahorse-like creatures. The rather unusual aggressive behavior of these otherwise docile animals has Panthro befuddled until they spot a baby Sea-Quine pinned between the tank and the rocks. Despite all their efforts, the two ThunderCats and the two Sea-Quines are unable to free the infant. Fortunately for them, Slithe arrives again and Lion-O immediately anchors the tank to the NoseDiver by firing a harpoon from the tank. In trying to get away, Slithe not only damages his vehicle, but ends up releasing the ThunderTank and and freeing the baby Sea-Quine. The two ThunderCats then drive the tank out of the water and onto the seashore where they are greeted by the rest of their team. 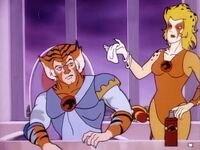 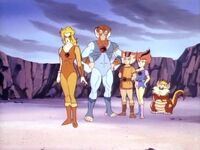 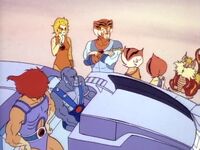 Panthro: Now that they Mutants have retrieved their weaponry, it's a whole new contest.
Tygra: Hmmm... they must have raised their spaceship somehow.

Gumla the Tabbut: My money...
Slithe: You still have your head. Be grateful.


Panthro: They're sky-cutters. Mutant ships.
Lion-O: But I thought all their equipment was destroyed.
Panthro: Not completely, it looks like. I'll tend to that... now.


Lion-O: That thing is amphibious, Panthro. He tricked us into going off that cliff.
Panthro: Yeah? Well, we've got a trick up our sleeve, too. The ThunderTank can be driven just as well on the ocean bottom.
(the tank falls upside down)
Panthro: But not on its back!


Panthro: We can always replace the ThunderTank. No way we can ever replace a life.


Snarf: You've been running underwater tests on the ThunderTank, and you called us all the way out here to see that?
Lion-O: If it was a test, we passed.


Tygra: Evil never sleeps.
Snarf: Even worse... it doesn't give anyone else a chance to sleep either.