The Thunder-Cutter is an episode from the original series of ThunderCats. Written by William Overgard, it originally aired on October 29, 1985.

Infuriated by the Mutants' excuse that the Sword of Omens is invincible, Mumm-Ra summons Hachiman, a legendary Samurai, and his sword, the Thunder-Cutter. He deceives Hachiman into believing that Lion-O is evil. Hachiman confronts Lion-O while the ThunderCat is en route to the Warrior Maiden's Treetop Kingdom with Nayda. They engage in a fierce contest of egos and Nayda saves them both from destruction. Even this narrow escape does not prevent Lion-O and Hachiman from continuing their confrontation - but neither the Sword of Omens or the Thunder-Cutter will obey its master. Lion-O and Hachiman realize that they are both honorable and that Hachiman has been deceived by Mumm-Ra. They join forces, only to be attacked by S-S-Slithe and Monkian in SkyCutters. They capture S-S-Slithe and take him to the Treetop Kingdom. Mumm-Ra summons a Ninja who assumes the form of Gumla the Tabbut and infiltrates the Treetop Kingdom by pretending to negotiate for S-S-Slithe's release. During the night, he transforms himself back into the Ninja, arms S-S-Slithe and warns that the Mutants will attack at dawn. The Ninja now attempts to destroy Hachiman, using Nayda as a hostage. She neutralizes his bargaining power by diving toward the ground, oblivious to the mortal danger. Lion-O hurls the Sword of Omens at a tree trunk. The Sword sticks and Nayda saves herself by grasping the hilt. Lion-O, Hachiman, the Warrior Maiden's and the ThunderCats defeat the Mutant's attack.

Honor is excellence of character, aspects of which include dignity, integrity, courage, and pride. In this episode, Lion-O, who lives by the Code of Thundera, meets the Samurai, Hachiman, who also lives by a code that includes honor. The honor of Hachiman, however, is almost subverted by the deception of Mumm-Ra, who attempts to have him and his sword fight on the side of evil against Lion-O and the Code of Thundera.

During the course of their encounter, Lion-O and Hachiman, blinded by a false bravado, lose their perspective and engage in a duel. Neither claims he can back down and maintain respect and honor. But true honor is not a confrontation, which ignores the rightness, justice, and truth of one's actions. In a stand-off in which these principles are ignored, no one wins. Were it not for the practical good sense of Nayda, both Lion-O and Hachiman would have perished for a distorted notion of honor. They are brought to their senses by the power of their swords, which are unable to be used for evil purposes. Reminded of true honor, they join forces and persevere against Mumm--Ra, the Mutants, and the honorless Ninja

In our lives, we must be careful to learn the real definition of honor, which involves reference to rightness, justice, and truth. We must be on guard so that we do not fall victim to a false bravado, which ignores judgments about the purposes of our actions.

Furious at the Mutants' constant defeat at the hands of the ThunderCats, Mumm-Ra is chastizing them in his Black Pyramid. In their defense, the Mutants attribute their failure to the Sword of Omens, the powers of which are beyond compare. To counter the ThunderCats' sword, Mumm-Ra decides to enlist the help of an equally powerful blade. He calls forth an ancient swordsman by the name of Hachiman. The samurai who abides strictly by the code of Bushido wields the mighty sword known as Thunder-Cutter. Despite being a good and noble warrior, Hachiman is tricked by Mumm-Ra into believing that the ThunderCats are evil and so the samurai heads out to eliminate their leader, Lion-O.

Oblivious to the evil plan that Mumm-Ra has set in motion, the ThunderCats are in good spirits in Cats Lair as they show Nayda their latest invention, the Mutant Attack Warning System. The device, invented by Panthro, is meant to warn the Warrior Maidens of any impending Mutant attack, giving them enough time to prepare themselves to fight off the intruders. Lion-O and Nayda start their journey to the Treetop Kingdom, taking the device with them. Instead of the usual route which takes three days to complete, the duo take a shortcut across the Four Day Drop chasm that Nayda recommends.

When the two arrive at the Four Day Drop, Lion-O learns that it is named so because if someone were to fall into the chasm, it would take them four days before they hit the bottom. As Lion-O starts to uneasily cross the thin log spanning the chasm, he runs into Hachiman who was crossing it from the other side. When each of the two refuses to back off and let the other pass, they engage in an ego war in which both Lion-O and Hachiman take turns slashing the log using their swords. The log inevitably snaps and as the two are falling into the abyss, Nayda rescues them and pulls them up.

After having a hearty laugh at their childish behavior, both begin to head their separate ways when Hachiman learns the identity of Lion-O. Having found his target, Hachiman challenges Lion-O to a duel but as soon as they start to fight, both the Thunder-Cutter and the Sword of Omens refuse to draw. Both Lion-O and Hachiman realize that the duel is evil, hence the swords refused to draw. Realizing that he had been lied to by Mumm-Ra, Hachiman becomes friends with Lion-O and with one quick slash of his katana chops down a tree to form a new bridge across the Four Day Drop.

Suddenly the trio come under attack from Slithe and Monkian on the SkyCutter. Working together, Lion-O, Hachiman and Nayda succeed in bringing down the Mutant craft. Monkian quickly flees the scene but Slithe, who is pinned under the SkyCutter, is taken hostage by the heroes to the Treetop Kingdom.

Not one to give up easily, Mumm-Ra summons another ancient Japanese warrior, a Ninja, to bring his evil scheme to fruition. Disguised as Gumla the Tabbut, the Ninja infiltrates the Treetop Kingdom pretending to be a hostage negotiatior. At nightfall, the Ninja begins his dastardly activities but is quickly discovered by Hachiman. The Ninja then uses Nayda as a hostage to keep Hachiman at bay while a troop of Mutants launch an ambush on the Treetop Kingdom. Seeing the battle, Lion-O quickly summons the other ThunderCats, and their arrival in the ThunderTank sends the villains fleeing. Having earned Lion-O's friendship and respect, Hachiman bids him farewell and walks off into the sunset. 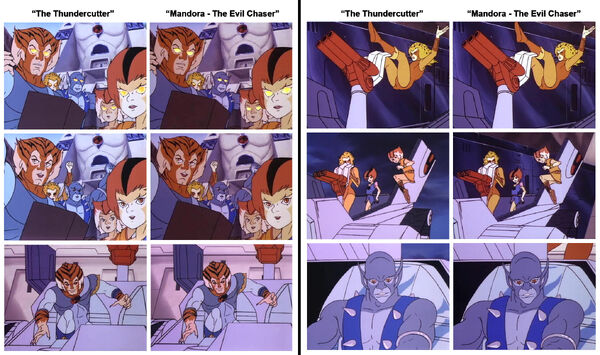 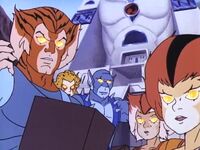 Retrieved from "https://thundercats-ho.fandom.com/wiki/The_Thunder-Cutter?oldid=28046"
Community content is available under CC-BY-SA unless otherwise noted.