The Tower of Traps

The Tower of Traps is an episode from the original series of ThunderCats. Written by Leonard Starr, it originally aired on September 18, 1985.

WilyKit and WilyKat go to the aid of a friendly Wollo who is being robbed by two gargoyle-like creatures. A chase leads WilyKat to become imprisoned in Baron Karnor's Tower of Traps. Lion-O comes to the rescue after overcoming a series of evil traps (Octopoids, acid pits, menacing Scabbard Pendulums); he confronts and defeats the living Gargoyles and saves WilyKat, with the help of the ThunderCats.

A trick played on someone, like Lion-O played on Snarf, is not necessarily funny, when viewed from the other's perspective. Before playing a trick, it is important to put oneself in the other person's shoes. Similarly, it is important to be aware of the motives for others' actions. Parents or elders worry about us not necessarily because they don't trust us, but because they care about us. It is important to express feelings we may have for others so they accurately know what we're feeling. In this episode, WilyKit and Snarf express feelings they have for WilyKat and Lion-O.

Greed or being avaricious towards material resources is ultimately wasteful and destructive. Things are meant to be used judiciously for productive purposes, not sealed away and preserved, like the treasures Baron Karnor hoarded. In like manner, feelings and positive emotions for people we care for are meant to be expressed and shared with them, not hidden inside us. And we should try to be aware of the feelings others have and be considerate of them.

Social sensitivity is the ability to perceive accurately and comprehend the behavior, feelings, and motives of other individuals. In general, social sensitivity increases as children grow older, and preadolescence is a period when extensive growth in this ability takes place. Social sensitivity also increases as intelligence increases. And socially sensitive children are viewed as more socially adjusted by peers and teachers, especially in their leadership and friendliness. (Rothenberg, 1970).

Under Tygra's orders, the ThunderKittens are mapping out the forest and surrounding regions. Suddenly an uproar grabs their attention and they follow the noise to find two stone Gargoyles in the process of robbing an old Wollo Traveller. Using their fighting skills, WilyKit and WilyKat save the Wollo but fail to stop the Gargoyles from fleeing with the Wollo's bag which contained a Gold Bracelet with two hearts intertwined. It was meant to be a present for the Wollo's daughter, whose wedding he was on his way to attend.

The twins learn from the Wollo that the Gargoyles are under the control of Baron Karnor, a thief who resides in the Black Tower and makes the Gargoyles steal for him. The two young ThunderCats make straight for the tower but are bewildered when they find no entrance to it. While searching for a way in, WilyKit notices that WilyKat has vanished and not responding to her calls.

Lion-O, who is taking a relaxing dip in a small pool by Cats Lair, is alerted by the Sword of Omens about the ThunderKittens' predicament. He quickly heads for the Black Tower and upon arrival is informed by WilyKit about her brother's disappearance. Retracing WilyKat's steps, the two try to prise open one of the rusty doors when a trap door opens up under their feet and they drop into it. The two Cats end up inside the Black Tower and upon calling out to WilyKat, they learn from his response that he is caged at the very top of the building.

Beginning their ascent up the Black Tower, Lion-O and WilyKat face a hoard of booby traps including a trick staircase, a ravenous Octopoid, an extending chasm, laser beams firing statues and giant swinging blades. After successfully passing through all the traps, the two intrepid Cats reach WilyKat and free him. A nearby door suddenly opens by itself and a strange voice invites the trio inside the room. Warily they enter the room which is filled with the stolen loot that the Gargoyles have amassed for the Baron over many years. Also in the room is the Baron's corpse, still sitting on his throne. They realize that the inviting voice was nothing more than a recording when the doors slam shut, locking the trio in the treasure room.

All seems lost when a small panel opens up in the ceiling and one of the Gargoyle drops the Wollo's Wedding Bracelet into the room. Seeing it as their only exit, Lion-O and the ThunderKittens climb out of the same opening in the roof. Before they can take a breather, the Gargoyle Statues spring to life and lunge at them. Lion-O uses the sword to call for help and the ThunderCats arrive swiftly and dispatch the stony nuisances.

As the victorious ThunderCats are driving home in the ThunderTank, they make a stopover at the Wollo Village where the wedding celebrations are in full swing. WilyKit and WilyKat return the Bracelet to the Wollo Traveler who then presents it to his daughter. 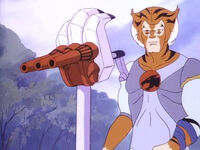 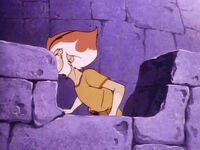 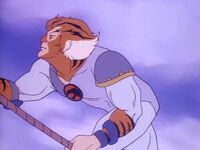 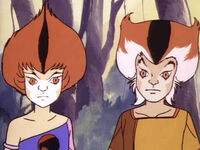 Lion-O: Remember Jaga saying, "It's wise to save your money and to spend it carefully, but greed can destroy you."
WilyKat: Yeah, Jaga must have had this guy in mind.


Lion-O: I didn't mean to scare him. I guess a joke doesn't seem all that funny, when the joke's on you. I'll have to remember that..


Tygra: So Baron Karnor brought the Gargoyles to life to do his robbing for him.
Lion-O: And they kept stealing even after he was gone.