The Trouble with ThunderKittens is an episode from the original series of ThunderCats. Written by Kimberly B. Morris, it originally aired on December 17, 1985.

WilyKat and WilyKit, attempting to prove they are grownup, secretly take the weapons of the adult ThunderCats in order to learn how to use them. However, when the Mutants discover them, they lose the weapons in a skirmish. They return to the Cats' Lair, ashamed of what they have done and fearful of punishment. In their fear, they decide to take the dangerous risk of breaking into Castle Plun-Darr alone to try and regain the weapons. But they are repelled by the Mutants and again return to the Lair. Finally, they own up to what they have done by admitting their deeds to Lion-0. After a brief expression of anger, Lion-O does not seek to punish them, but plans a way they together can retrieve the weapons. They are successful in this and, in an act of forgiveness, Lion-O protects them by not letting on to the other ThunderCats what happened.7

Sometimes we get caught up in the same sequence of events WilyKat and WilyKit experienced. Trying to be grown-up, we impulsively attempt something foolish that is beyond our abilities. Often this leads to some accident. And, frightened of discovery and punishment, we either avoid owning up to what we've done or we do something else to try and undo the original act. There is another sequence of events possible, which we can learn from WilyKat and WilyKit. It begins by not starting with the assumption that our parents or authorities will treat our misfortune by showing us disapproval and punishment. Often, like Lion-0, they will not react with anger, but with understanding and forgiveness. Then, when that happens, we won't feel we individually have to deny the act or secretly attempt to rectify it. Instead, our parents or authorities will help us take responsibility and work with us to make things better. We should not assume adults would act negatively. Acknowledging this can be a smart lesson, which will save us from further foolish accidents and will make it easier to be responsible for our actions. 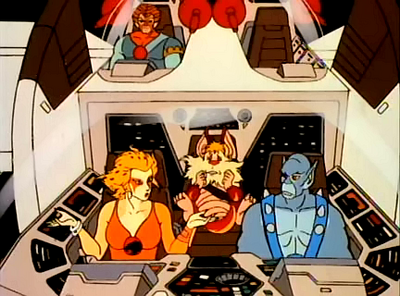