The Wolfrat is an episode from the original series of ThunderCats. Written by C.H. Trengove, it originally aired on October 30, 1985.

Mumm-Ra has a phial of miniaturization gas. Vultureman builds a mechanical Wolfrat to infiltrate the gas into the Cats' Lair. The ThunderCats are immediately reduced to nine inches high. Knowing how vulnerable the ThunderCats are in this state, Mumm-Ra orchestrates a Mutant attack on the Cats' Lair. The ThunderCats' only hope is Snarf; they armor Snarf and use him as a battle charger while Tygra works on an antidote. The ThunderCats finally take the antidote, and Snarf, getting an accidental whiff of it, grows to huge proportions. In his gigantic state, Snarf terrifies the Mutants and puts them to flight.

Sometimes in our minds we may overemphasize the importance of certain physical characteristics. We may feel bad or worry that we are at a disadvantage if we don't possess a quality. For some, physical size and strength is a desirable trait. But often it is given too much importance. In reality, the lack of a physical quality does not have to be a deficit and it may be counterbalanced by other characteristics.

In this episode, the ThunderCats find themselves physically mismatched in fighting the Wolfrat, when they are cut down in size. However, they use speed, improvisation, teamwork, and determination to persevere against the robot and the Mutants. The lesson for us is that we must never place too much importance on any one characteristic, but should strive to grow in and use all of our personal qualities. It is our whole personality that counts, not any one trait.

The Mutant genius, Vultureman, proudly displays his latest invention to Mumm-Ra inside his Black Pyramid. The invention happens to be small cat-sized infiltration robot called the Wolfrat. Impressed with Vultureman's invention, Mumm-Ra arms the robot with a special Miniaturization Gas and it heads straight for the Cats Lair.

Using its ability to transform into various shapes, the Wolfrat remains undetected by the lair's scan vision and even manages to fool the Sword of Omens' "Sight Beyond Sight". Once it sneaks into the ThunderCats' fortress, the Wolfrat releases the Miniaturization Gas into the lair's ventilation shafts.

The gas gets to work immediately, shrinking the ThunderCats down to just a fraction of their original size. While the confused heroes try to figure out what just happened to them, the Wolfrat appears and blitzes them with laser beams. The pint-sized Cats split up, with Tygra trying to manufacture an antidote for the Miniaturization Gas while Lion-O heads to the Sword Chamber. Looking through the hilt of what seems like a gigantic Sword of Omens in comparison to himself, Lion-O sees that the Mutants are already outside the lair in their vehicles, and will launch an ambush at any time.

Shortly, Snarf, who was out gathering Candy Fruit, returns to the lair, blissfully unaware of what was going on. As soon as he enters the lair, he comes under attack of the Wolfrat's lasers. He succeeds to avoid them and locates the other ThunderCats. Panthro uses pieces of metal to construct a tough suit of armor for Snarf, to protect him from the Wolfrat's lasers. Then the ThunderCats and Snarf launch an attack on the robot and destroy it.

The Mutants breach the lair, hoping to make short work of the diminutive ThunderCats. Fortunately, Tygra manages to concoct the antidote, and uses it to make himself and his friends grow back to their normal size. Snarf accidentally gets a dose of the antidote and grows to a massive size. The giant Snarf single-handedly dispatches the Mutants before Tygra assures him that the effects of the antidote on him are temporary and should wear off shortly. 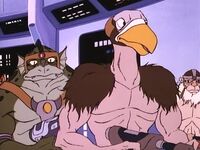 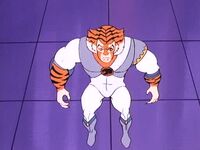 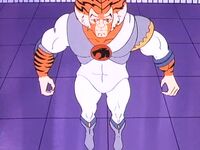 Retrieved from "https://thundercats-ho.fandom.com/wiki/The_Wolfrat?oldid=28140"
Community content is available under CC-BY-SA unless otherwise noted.