Turmagar the Tuska is an episode from the original series of ThunderCats. Written by C.H. Trengove, it originally aired on November 22, 1985.

Turmagar, the Tuska, a walrus-like humanoid, crash-lands his Gomplin at the Cats' Lair and asks for help. A Giant Technopede threatens his country’s water supplies. Leaving Panthro and the ThunderKittens behind to repair the Gomplin, Lion-O and the other ThunderCats take Turmagar back to Tuskania in the ThunderTank. During the journey, Lion-O has to rescue Tygra a hypnotic Vampire Mermaid. When they arrive, the ThunderCats confront the Giant Technopede. The balance of the battle is swung in Lion-O's favor only when Panthro and the ThunderKittens arrive on the repaired Gomplin. The mission is accomplished; the water supplies saved.

The Thundercats' mission to save Tuskania's water supplies reminds us of the importance of our environment's natural resources. Water, in all its forms, whether as ocean, river, rain, dew, or frost, nourishes the life giving potential of the earth. It is one of the symbolic four basic elements which once were thought to compose the physical universe: Earth, Air, Fire, and Water. Because water is so fundamental and at times so plentiful, we can be deluded and take it and our other natural resources for granted. Like Tygra, who was mesmerized by the Mermaid, we can be lulled into complacency regarding he beneficence of our environmental system. But we know in this age of environmental awareness that we must learn to respect our natural resources more and take measures to safeguard against their depletion.

Riding his trusty steed, the Gomplin, Turmagar, leader of the Tuskas, makes his way towards Cats Lair. His arrival triggers the intruder alarms inside the lair, prompting the ThunderCats to rush outside just in time to see Turmagar making a crash landing.

As the ThunderCats help him to his feet, he reveals the purpose of his visit, which is to enlist the help of the ThunderCats to defeat the Giant Technopede, a war machine that is wreaking havoc in the land of Tuskania and attacking the Tuska’s only water source. The Cats readily agree to help Turmagar, and while Panthro and the ThunderKittens remain behind to repair the Gomplin, the rest of the feline heroes take off in the ThunderTank.

As they make their way to Tuskania via the River of Despair, the Cats encounter a number of obstacles and dangers, including a powerful underwater current, the ferocious Black Widow Shark, and a Vampire Mermaid. The Mermaid succeeds in seizing control of Tygra with her hypnotic singing, but the timely intervention of Cheetara and Lion-O prevent the Mermaid from sinking her teeth into Tygra. Lion-O manages to seal the Mermaid in an underwater cave before the group continues their journey.

They arrive on Tuskania to witness the Tuska Warriors losing ground to the Giant Technopede. The ThunderCats join in the attack but fail to inflict any real damage onto the giant machine. However, the arrival of Panthro and the ThunderKittens atop the Gomplin turn the tables around. The heroes then focus their attack on the massive legs of the Technopede, making the behemoth fall and explode to pieces. 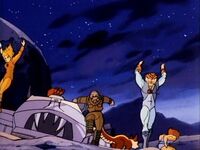 Tygra: (after the encounter with the vampire mermaid) That was close! Thanks!
Snarf: Let's hope that's the end of the whole fishy business.


Turmagar: There! It is to protect springs like this that you fought so gallantly
WilyKat: Doesn't look like much, does it?
Turmagar: No. But without such natural resources, however insignificant they seem, life would not go on.

Turmagar: My city is in ruins. We are too late! The infernal Technopede has conquered my people. We can no longer protect the source of the river. And the lands will wither and die.
Lion-O: Hang in there, Turmagar. We'll straighten it out.
Cheetara: Don't give up now!
Snarf: Not while the Thundercats are pulling with you


Panthro: Take the ThunderTank, Lion-O. Sounds like you'll need it. I'll stay here and fix this... monster.
Turmagar: That, sir, is not a monster. He is a Gomplin, loyal and brave. My ancestors domesticated Gomplins many centuries ago.
Panthro: Well, Turmagar, whatever it-- um,he is, I'll fix him up while my friends take care of your Technopede!

Retrieved from "https://thundercats-ho.fandom.com/wiki/Turmagar_the_Tuska_(episode)?oldid=31210"
Community content is available under CC-BY-SA unless otherwise noted.